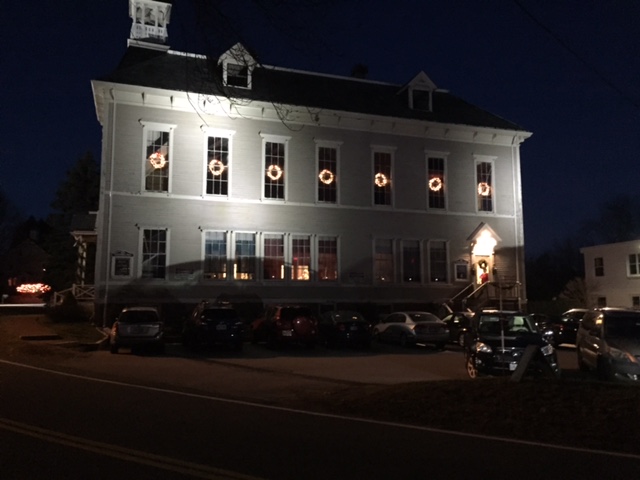 NORTH HAMPTON — There may not be snow on the ground yet, but Christmas was in the air as residents gathered on the green to celebrate the 23rd annual lighting of the town tree.
Once again a concert of carols was sung by the fourth-grade students of North Hampton School, as they stood in the glow of the gazebo’s festive lighting, joined by the crowd in song.
After the lighting and caroling, in what has become another annual tradition, the crowd moved over to Centennial Hall where a reception was held. In commemoration of the event, Centennial Hall was decorated in holiday flare, which included an exterior illuminated display.
“I love that the holidays get people singing,” said Christine Petrucci, director of the Seacoast Academy of Music which is based in the Hall. “The amount of people singing at Christmas time is great.”
Petrucci was playing holiday tunes on the piano for the crowd which had gathered to enjoy a donated spread of delicious cider donuts and apple cider.
Helping to set up those refreshments were Riley Queenan, Eily Burgeson and Annika Jacques, members of local Girl Scout Troop 51106.
The evening’s tree lighting marked the beginning of what looks to be a busy holiday season for all three.
“I’m going to have three Christmases,” said Jacques, who described her holiday plans being a busy schedule of visiting different family at various locations. When asked what she’d most like to find under the tree? “A giant squishy,” she responded with no hesitation. In case you may not know what that is, it’s a giant squishy foam object of almost anything from a panda, to a watermelon slice.
“I’m going to New York,” responded Queenan, who also had a full slate of holiday stops. On her wish list – a giant Beanie Baby.
For Burgeson, the highlight of the season is getting and decorating a tree with her family, and for underneath it, she is hoping to find a Hatchimal.
The holidays can evoke many different feelings for people, and these third-graders were no different. For them, the yuletide season is about more than gifts, it is a reminder that February vacation is getting closer. “I’m going to Florida, so I’m looking forward to that,” said Queenan.